I am working on a custom order currently, and taking my time because I am waiting for some beads to arrive because of mistake number one.

I did not order enough beads, I thought I did, but I did not double check, so finally when I sat down to make this order, I am short. Thank goodness she does not need it for four months. This is part two of the order, an add on to the first order . Then, mistake number two, I ordered what I thought was 6 by 8 mm black beads, when I read my confirmation letter, nope, I ordered 6 by 4 mm.  They will not work. I had  picked that seller as they were the only non China seller that was that also had a good price !!  She does not have the correct size and I was stuck because I learned they were the wrong bead when I got the order sent letter.  I would not have tried to cancel anyway, it is not her fault I was on the phone and not paying attention when I ordered them . I can get the  beads  I need dirt cheap from china 70 of them for 50 to 99 cents, I paid 4.50 for 40 of them, shipping added in, and they are the wrong size. I get them from China, NO SHIPPING FEE. So, if I pay 50 cents, that is all I pay. I wanted to get it done by next week, but now I have to face the fact I have to wait for beads to come from China, which can take up to a month. She said when I wrote her about getting the order done, I have not told her this little mistake yet, that I was not to worry, she did not need them for four months so if it takes longer, no big deal. I feel bad though.

But it gets worse. I had to have her pick a different charm for each set, 3 sets of 12 charms, one is no longer made. I was putting the sets together and one of the charms I thought I had, was missing. I was NO way going to have her pick another charm, so I just ordered a set of them  , 15 charms, for 2.50 . I did find the perfect charm  for a gift for one of our daughters, so it ended up being a good thing, but I had to spend 2.50 plus shipping to get 15 of those charms, but that included the other charms as well.

I felt a bead on the floor and when I got down to pick it up, what do I see, the stinking missing charm. Yep, the one I just ordered 15 of to keep from having to disapoint this lovely customer who is so great to work with.

I am adding this the next day. The real stupidity of this, I had sent her a picture of the charms, in which THREE of those charms are clearly visible. Sigh. I was not on my game at all , that is for sure !!

So, I made to mistakes that cost me money.

I ended up going to Ebay since she did not have that size,  and ordering four  strings of the correct black beads for . 50 cents, two for 60 cents,  and one for 75 cents, NO shipping. I spent 2.45 for 210 beads. This is a size I use regularly so I am fine with that, but I figured if they are all coming from China, maybe one will get here sooner .I have had stuff NEVER show up from China, things show up weeks after I order then and some right away. I need to get this order done, so figured I would give myself some options so maybe one will get here quicker than the others !!  Not have all my eggs in one basket per se. I wish so bad the ones I ordered were the  right size , then I would have them right away !!

So, this is what I am working on. Pirate charms for a wedding renewel early next year. She had seen my listed set, later sold, and we built this set with her preferences. Unfortunately since we did the first set, one of the charms is no longer made, so that is a shame. I loved the charms, and I think the entire set I had bought  for the orginal charms, she used four of them, are going to be canceled , if they are not already. I have two sets in gold plate, I am going to make some wine charms out of them later. This is the first set we did last year.  below it is the pirate charm set she saw on Etsy that had her contact me to make the custom ones !! Below that, is a finished one I just did to show you !! The finished charm is the same color, silver as the rest, but for some reason it looks gold in the picture !! 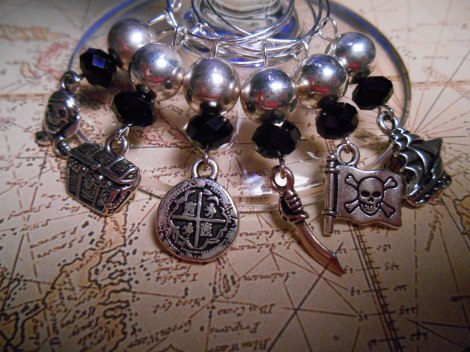 As I was downloading these pictures, the mail came !! The smaller beads I had ordered by mistake were in it !! Wow, that is really fast shipping, I was very impressed !! I could not believe what she included in my order !! Everything was in a pretty bag with rhinestones on it, and she included a nice bracelet blank with a very nice clasp and a charm !! I will be ordering from her for sure and will make sure to put a link to her Etsy shop in this post. How wonderful to be upset with myself about a wrong order and then get such a fabulous surprise !!  The beads are great, and I will use them for other projects , but I hate making mistakes that cost me money !! Getting some pretty gifts really helped take the sting out of that mistake !! BUt I found a great new seller so that is good ting to come  out of my mistake too !!

Here is the link to her shop,

so, that is how I made a bunch of mistakes  on one order, lol !!

Thanks for stopping by !! I always appreciate it !!