Well, my shelf situation has not changed and I am still currently short one shelf. I had ordered three shelves to match the one I had from Target. As with the other Target shelves we had bought in the apartment, we had a broken unit so I called and they told me they would ship another one out and I was to return the other one to a store. So, since it was raining and then my husband was dealing with doctor appts for a work injury we could not get it back until Sat morning. What a nightmare. It turns out whoever I talked to did not understand the situation because when David and our son took the shelf back, we found out, no, they had not sent the other one out like I had been told and that we had to return this one, to get the other one ordered. Problem was, we got a lot off on a big sale so we were afraid if we returned it and got a refund, now we woudl have to pay forty more dollars for the replacement. So, they hauled it back, the guy at our local Target store was on our side and could not understand why they would not just let us return it, and then they could issue the new unit, he tried talking to them but to no avail.

So, when David got home he called again and let the guy know how mad we are. Out of six shelves we have bought from Target, three have had to be returned for damage or misssing, wrong parts. We are a bit leary to order another one and of course the one we want, that color is only available online. He told my husband he would put notes in the account that once we returned the other one, and got our money back, we would be able to call back and get the new one for the same price we had paid and he sent us a ten dollar gift card we could print out for our inconvience. No one can understand why we were told what we were and here I sit, weeks after the first order one shelf short.

So, they took it back yesterday morning and the same guy was there and gave David cash , he was really ticked off that the online dept was giving us so much trouble. DAvid called when he got home and the guy assured us he had put the details down to get it for the same price if we call and reorder.

We still were pretty mad about the entire thing. I had been expecting a new shelf to arrive and then to find out I have to still order it really upset us.  We decided to go out shopping and find new shelves as we had uses for the three we had and if we could get a corner unit we loved, we would just get that.

Arghhh, what a day. We hit a lot of stores and found only two options, well, sort of, really only one . One at Ikea, it would be about 400 but had a way to do the corner, and for some reason, we got the idea to go into an Ethan Allen store. Wow., Very pretty stuff but the only option they had were three cases with cubboards on the bottom and shelves on top, really pretty, they had white and black on the floor but you can order them in wood, for $ 7000 , OMG !!!

Here is the expensive unit. 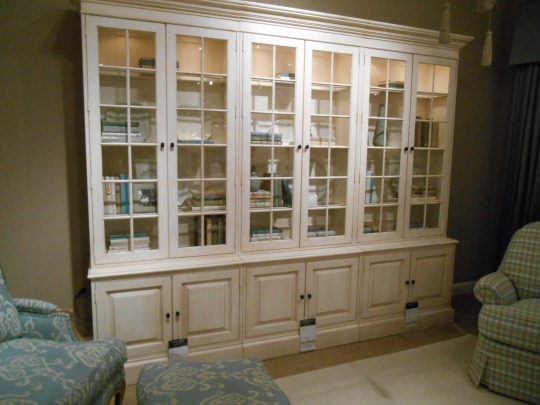 They are very pretty, but not seven grand pretty !!! That is a huge amount and I am sure they are well made but we were shocked. We could  hire a cabinate maker to make the same unit for MUCH  less and not have to wait 12 weeks to get it. I am not even sure why we went in there, but I t hink we were shocked it was that much. I should have known it was going to be too expensive when I saw some very heavy crytal candle sticks on a table and when I peeked they were 300 plus EACH.  The sales lady showed me some of thier new cheaper options, they were huge vase type things you can put on a table and put ornaments in for decoration, only 78 to 98 bucks and  she was  very happy with how cheap they are, argghhhh !! I can get something very similiar on half price with a coupon at Hobby Lobby for 15 bucks, lol !! But that was the only thing in that store that was not completely rediculous. They have gorgeous stuff , no doubt about it, but wow.  That is a lot of money. She said when they run credit they put in for 20 grand, lol. I said, wow. that is a lot , she said, yeah, that is a nice living room , lol !! Wow. We have a very nice living room and all together it is only like 2 grand , that includes a nice sleeper sofa and a 200 warrenty on the sofas that transfers to credit in the store if we do not use it in five years, so a 20 grand living room, wow. I do not care how much money we ever have, 20 grand for a living room would  not be a choice for us !!!

It was fun and interesting but after a day of looking at prices and options and then coming home and looking at what we have, we decided to take a chance on another Target shelf. So, we will call tonight to order it, and then see if we get a good one . I will just cross my fingers and hope for the best. We have at least a 50 / 50 chance based on our past experiences , lol !!

So, I asked my hubby to put the beading one back in place so I can get it put back to gether. I am tired of the table being a mess. 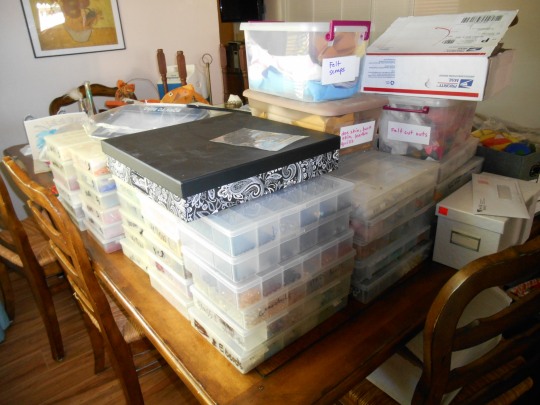 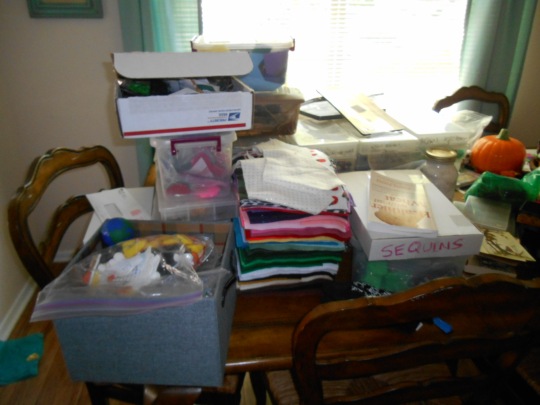 So, after I post this, I am going to get moving on it. I have several orders to make and some other items I would like to start working on and I need that dinning room table to spread out on. So, that is todays chore !!

I had to share this picture of Ikea, that store was so huge it was unbelievable. I started to almost panic trying to find our way out. It is laid out like a maze, so you cannot easily get out of the store and it is so huge. We liked some of thier stuff, but not sure if we are willing to deal with the crowds and that maze again. I could not get it all in one shot and unfortunately the other shot I took of the other side  shows license plate numbers on cars, so this will have to do, but it was twice this size, HUGE !! The parking lot was packed as so was the store. Just amazing. 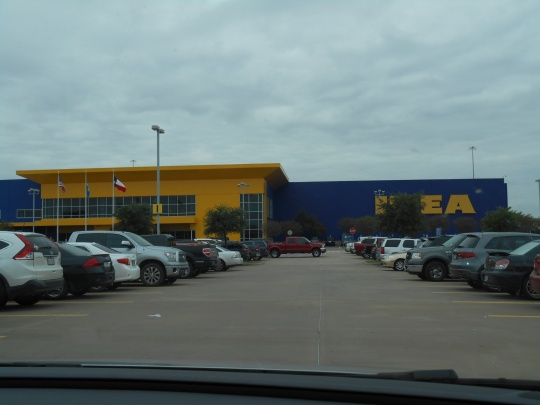 We hit Ashly, and they had nice ones, comprable to the Target in style but solid wood and 300 each, so a bit out of our budget for this project, Rooms to go who had NO shelves at all , Ikea, Ethan Allen and a few smaller stores, only Ikea had an option we could consider but they were not near as pretty as the Target ones, very plain and bare, no wood colors we really liked , are and were more expensive in the long run too .

It was an interesting day and fun to get out of town and explore another area and look through the stores !!

Thanks for stopping by !!!