After having a conversation about thread with a fellow blogger , Eunice over at Nuts for treasure. Her blog is on my blog roll under Living and Loving, be sure and check her site out , she is very creative !!  I thought it would be fun to do a post on differant kinds of threads and beading filaments to show what kinds of choices are out there.

Now I want to start with the fact I have been beading for over 20 years and have been using the same mediums all that time. I am going to look around some at what else is out there, but for now, this is what I have and what I have and have not used over my 20 years.

Eunice asked me if I used the clear filament for my trees, I had no idea what she was talking about, she explained and I later realized I have had a large spool of it for years, twenty years I believe. We used it once, and hated the result, so we never used it again. I say we because my husband is the one who got me into seed beads. I had only played with craft beads, those tri beads everyone made pins out of twenty years ago. We had both seen the same seed bead book , a few days apart at Michaels, but he said, lets get it, and we got it and a few seed beads and an addiction for me was born.
I stuck with small projects but he loved the large beaded necklaces so he made a few which I have pictured on the site under seed bead jewelry. The issue we had was the bugal beads would often be pretty sharp and cut the threads after a very short time making a mess out of the large necklaces and making all that hard work be wasted. He decided to try some fishing line on another type of necklace and this was the result. It is slightly worse after being storeed for over 20 years, but it never hung nice

he had used this 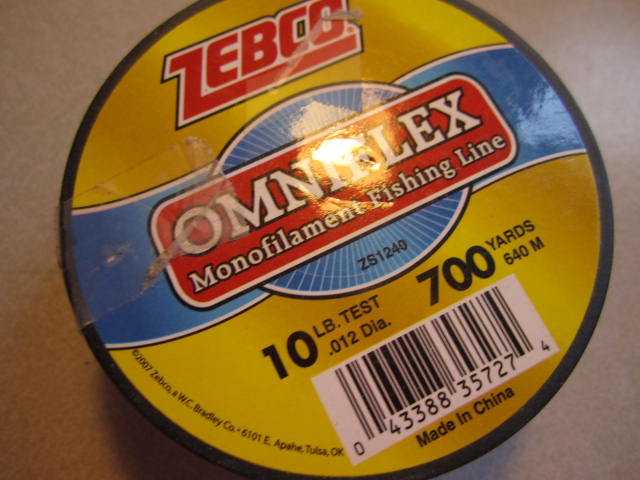 Not sure this is the exact one, I know I have had this one forever, but we might have had another one at that time, I will have to ask him.

So, we really just kind of stopped making those because it was so heart breaking when the bugals would saw the threads.

So, we are talking about trying again and looking into our options, they are such pretty pieces and it is just a shame we had to stop making them 20 years ago due to this issue and if we find a solution I will be sure and post on it.

So, these are some of the options I use today and have used all these years.

I have two ginormous spools of thread, 3 ounces each, which sounds small but they are big spools. The white one I have been using for the entire 20  odd years, sad story how I got it. I met a couple at a craft fair and they had been pulled into one of those make things at home and we will pay you for them. So, they paid for the materials and bought a few spools of this thread, which back then were ten bucks and that was a LOT that long ago. They did not have much money and hoped to supliment thier income but found every time they shipped in the 50 pairs of  earrings in for payment , there were some not right and they got sent back, so they finally gave up, and they were stuck wtih these spools and would I be interested in buying one ? I did and  I have used it all these years. The black one I bought recently and the quality is not even close to the quality of that old one. I have it taped because the minute you untape it it explodes, where you can see the white one is not taped and does not even unroll but an inch or two. The thread is good, but the spool is a night mare, not really sure what happened with it. Not the same quality I got all those years ago, that is for sure !! If you have old beading thread, treasure it and dole it out carefully, it is such great stuff !! 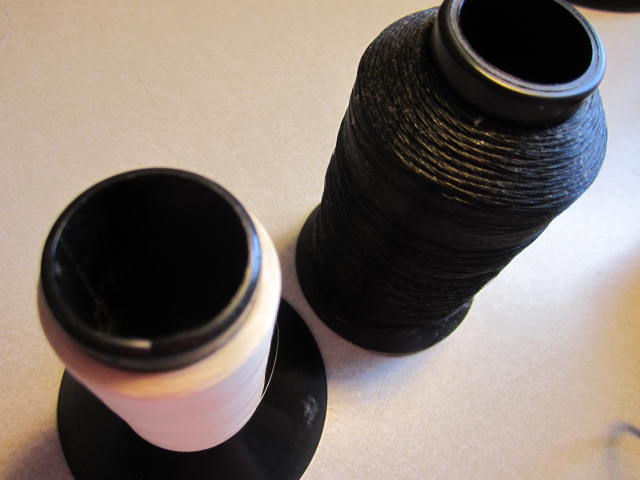 For many years I had only the white, then I discovered I could occasionally find little bobbin sized spools of black ,  red ,green , tan or brown and that was exciting !! I could use a thread that matched my project. Fast forward to today and online I have found all kinds of pretty colors and since I work with sequins and seed beads having matched threads for my pieces is amazing. Here is my current collection, minus a few on my chinete plates I keep with colors I use often in my bead work. 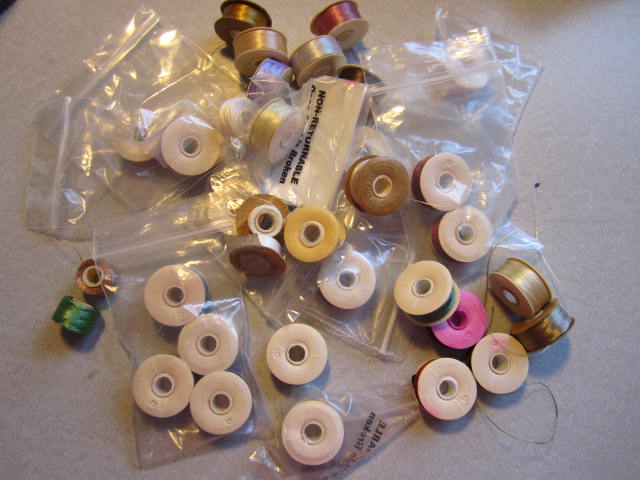 These spools are relatively inexpensive and last longer than you would think. I have muliples of the colors I love or use the most just because I can basicly, lol. I love the choices I have now when I bead.

I also have one odd spool of white , not sure how much is on the spool. It is much smaller than the  large spools, but it is also a differant size. The large spools are O and this is D. Here you can see the differance , it is slight, but is there. Then I show a picture to show you the differant sizes next to a modern sewing thread I got at Walmart recently. 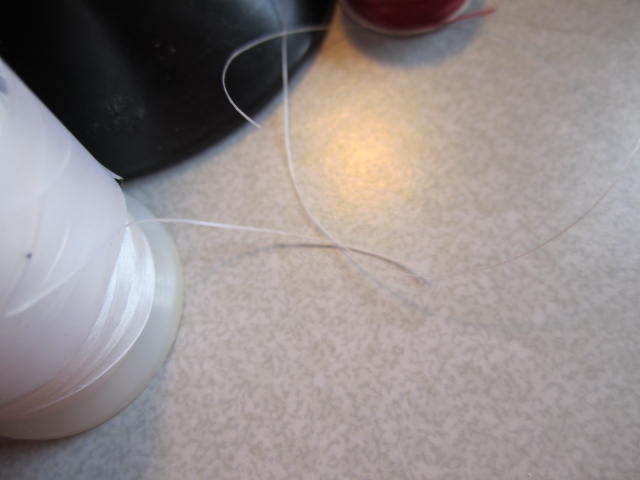 There are also wires for beading. I think they are used a lot in bracelets and I have a bracelet a friend sent me to size down and it uses the wire. I will make sure to post on that and how to use it when I do that project this next week. 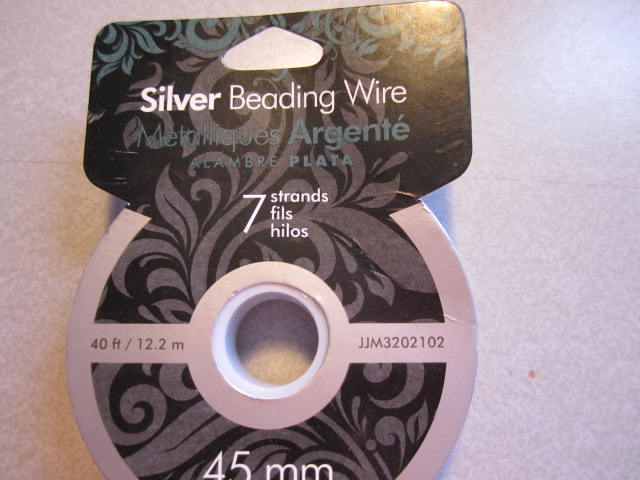 You use this with crimp beads to hold it tight unlike thread that you tie off. They look like a bead but you slip them on  and crimp them down to hold the wire closed before you string on the beads and then at the end. Very easy and effective. These are about 20 odd  years old from when I used to make seed bead rings with what we called Tiger Tail back then. I am not really sure what all the names are today. The one I pictured was 2.00 at Walmart and I thought that was great , but I will investigate and take some pictures at the craft store of other options.

I also found this in my stash of threads, it is very thick. I cannot remember the project I picked it up for, but normal beadwork , it would be way too thick.

Sewing thread is very pretty and comes in many colors, but it is not as strong as bead thread and I would never advise using it. Bead thread is made specially for holding together bead projects and is the best thread to use.

Bead thread is hard to break and you cannot simple rip it like sewing thread. It is a great product and with the choice of colors makes your projects look great.

This is far from all the choices out there, and I will do another post after I do some looking around and pick up a few new things to try. But for the beginning beader, it at least shows you some options and things that do work well.

I plan on doing some actual beading tutorials later, so keep watching if you want to learn some basic beading. It is very easy and so fun and rewarding to create amazing things out of tiny beads and thread. Your imagination is your only limit !!

Thanks for stopping by !! I would love to hear what you love to bead with, I am always happy to learn new things and share what I learn !!

5 thoughts on “Threads to hold it all together”